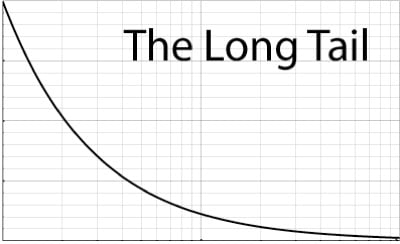 In the last 20 years with the Internet era many of the characteristics of our society have changed. The ways in which we used to communicate have been modified with new technologies such as email and social platforms. Human knowledge has grown because we can now access easily to information. Elements that where unthinkable for small companies before, such as divulgation of a video or publicity are now a reality thanks to the low costs of the Internet.

The firs model is called Long Tail. Some years ago, companies used to offer a little quantity of products to a big group of clients. Examples of these are the traditional companies of mass consumption that offer just a small number of products to a really big number of consumers. Therefor their value proposition is selling to the clients that are able to generate more profits. With the new model of Long Tail, this traditional idea changes and the company seeks to sell many more products, each to a smaller number of consumers. The idea here is to offer many niche products even if they are not massively sold.

An example of this business model can be seen in the way in which the books industry has changed. In the traditional model writers had to seek for a publisher that was interested in their book. This was not always easy because many book topic’s were not going to be able to sell to a big segment, so the publishers weren’t interested in this book. In the new Internet era, with companies like Lulu.com any author may upload his book to the platform and also print it and distribute it on an online marketplace. Books are only printed if a real order for them exists so there is not economic loses for the company. If a title is a failure Lulu does not lose anything because they did not incur in any cost in order to produce it.

Other excellent example of this model is the giant Amazon.com. In contrast to a physical store that has a specific area to place articles, Amazon being a virtual store does not have this restriction. Therefor they have the capacity to offer a greater number of products and not just the top sellers. This is the way in which they have been able to serve different niches and it is part of the success of Amazon. People know with a high degree of certainty that they are going to find what they are looking for.

Remember to read the next two posts in which I will bring other interesting business models of the Internet era.

Some centuries ago, when people wanted to start a business, they just had to have …