What defines “Being an Entrepreneur?” 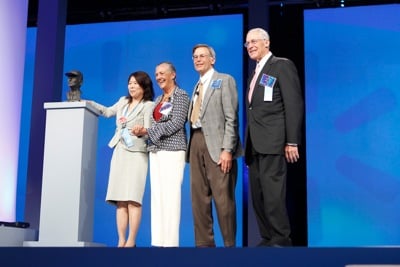 I’ve been an Entrepreneur to some extent for almost 15 years. During this time, I’ve asked this question many times and I’ve also been approached by others who have the same question. The fact is that this isn’t an easy question to respond and I believe there is no straight answer. In this article I’ll try to respond partially this question and I hope you (my readers) help me with your valuable input at the end of this page.

To start, there is a kind of philosophical point that entrepreneurs address. On one hand you will find those that believe that entrepreneurs are basically defined at birth and that there is something especial on their DNA. Others, like me, believe entrepreneurs are developed throughout life. If you ask me, I believe I wasn’t born to be an entrepreneur at all. My father is a doctor (MD) and my mom a Speech Therapist and for many years, they worked for someone else and had a steady paycheck. In the latter years my dad open an independent practice, which can be seen as an entrepreneur achievement, but I also believe this to be more of an accident than something he planned. There are many entrepreneurs in my family as a whole, some quite successful, however I was not raised up to be an entrepreneur, at least on my first 10 years or so.

When I was between the age of 12 and 15, several family related events happened that showed me that having a “steady” job was not an option and I had to look into entrepreneurship. However, my sister who is 3 years younger than me saw things differently and she has not showed the slightest interest in quitting her day job, and become independent, at least for the time being. So this is why I believe anyone can become an entrepreneur, if he or she decides to undertake this road.

One characteristic that defines entrepreneurs is our will to take on risks and uncertainty. We are risk takers on our nature, and although we can calculate the risk (if it’s worth taking or not), bottom line is we like risks. Someone several years ago also told me, due to this nature, that entrepreneurs have a hint or more of craziness or madness. I have to say this statement is not that unreal, as I think many people that are not entrepreneurs will only take these risks if they were crazy. So there you have it, entrepreneurs have a crazy nature.

Another trait that is essential is working for a dream, meaning that achieving this dream can take many months, even years. We are visionaries, who stand by our dreams and ideas no matter if it means time and sacrifices. It’s true that not all entrepreneurs make it to see their dreams come true. In this case, maybe we’re talking of a failed entrepreneur or someone who just didn’t have the essence of being called an entrepreneur.

Related to previous trait is the entrepreneur’s willingness to believe in himself or herself and to some extent, on his or her team. Generally speaking, entrepreneurs are positive people who are not easily brought down. Actually there are many entrepreneurs who at any given time fail, but that that a few months or years later restart their entrepreneur path, maybe with a whole new project. This is actually my case, where I failed on one of my projects, worked for someone else for a while and about a year later continued with my entrepreneur journey.

There is a word I think describes most entrepreneurs: constant. Entrepreneurs are constant on what they do. At times you might see that entrepreneurs are as I said, crazy, have no method and can even look poorly organizes. However there’s usually a method behind, not always the most logical one, but this method strives the entrepreneur to be constant. He or she knows the actions that have to be taken and they’ll do whatever it takes to achieve their dreams.

On the negative side there a couple of the characteristics that are not so interesting, including the high ego, the “know it all” and the “do it all” many entrepreneurs possess. At times these characteristics can be positive assets and will help the entrepreneur to achieve their goals, but they can definitely close doors at key times.

So this is my initial review of how you can define Being an Entrepreneur. As I said form the start, this is just a partial definition. Being an Entrepreneur is much more complex and definitely there are other traits and conditions. If you have other ideas or views, please feel free to share them at the end of this article.