May 21, 2014 Being an Entrepreneur Comments Off on Technologies for Entrepreneurs 5 – Wearable Devices 12 Views 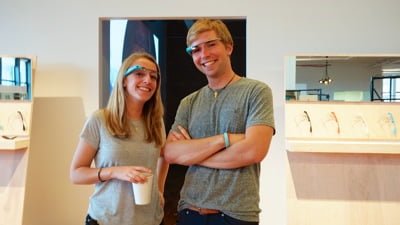 Technologies in many ways help entrepreneurs in their daily life and in the many projects they might have. In the last 4 articles, I’ve talked of how computers, laptops, Tablets and cellphones help in this quest. Today I’ll address a complementary technology, which is quite new for most of us and is still part of a new group: wearable devices.

The truth is that wearable devices are not that new. They’ve been around for several decades, lead mainly by some advanced watches that enable users to use them as calculators and agenda. These watches were created in the 1980s, but it is in the last few years where we’ve seen how these technologies can be a major part of you life.

One of the main wearable devices that we see today is glasses, mainly the ones brought by Google, called Google Glass. These glasses appear to come from a science fiction show, but they are a reality. You can ague that Google Glass is still a very early project and that there is a lot more things that the future will show us about this idea.

Other wearable devices that have been around for a couple years are intelligent watches. Most of theses watches are design to work with a smartphone. With the watch you can control some functions, like answering the phone, reading email and other type of messages.

At the time of writing this article, it is fair to say that we’ve just begun to see what wearable devices is all about. In the following years we will probably see a lot more devices, with many more functions and alternatives in the marketplace.

Ok, so this is nice, but where do entrepreneurs stand in regards to this technology? The answer for this has two very different roads. In the first one, I can imagine these devices becoming part of our daily life. As I said in the previous article about cellphones, all these devices can become my personal assistant. I’m sure that a smart glass, watch or whatever has the potential of becoming my personal secretary and make my life much more productive.

In the second part of the answer, entrepreneurs have a great deal of things to add to this new market. To start, we can be the ones thinking about the next great wearable device. Also, since this technology is so new, there is a huge market to create new apps, accessories and more. These are just a few ideas where you can definitely make some money.

Most of the ideas I’ve given and how I address the topic of wearable devices, is mainly speculative. The market if quite new, with expensive and basic devices, but I believe with time it will be massified. And we want to be near it, both as users and producers.